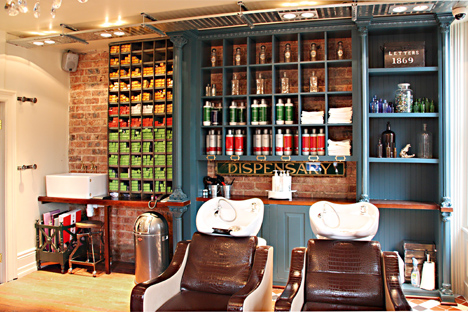 With more than 30 years’ salon experience each, Kim Le-Neveu and Steve Jones opened Boilerhouse in 1985 and quickly established a strong reputation in the Newcastle area.
Having successfully run the salon for nearly three decades, they decided to expand into adjoining properties, taking over a former jewellery shop as well as a derelict second floor that had been untouched for 50 years.
Clearly, a lot of work was needed to turn the multi-storey space into Kim and Steve’s vision of a genteel, French-inspired interior.
“The overall intention for the relocation and renovation was to start from scratch, utilising the space in the best possible way and ironing out any issues we had had in the old salon,” says Steve. “The vision for the décor was heavily influenced by an industrial look, softened with French shabby-chic French.”
Antique and reclaimed items play a large role in the salon, including light fixtures sourced from a Czech arms factory, tin panelling for the ceiling discovered at Newark antique fair, and shelving units originally housed in The Old Cinema in Chiswick.
One of the most striking features is a side panel from an old Boeing 737, which sits in the ground floor window. The plane’s windows have been replaced with three media panels, each playing film footage showcasing stylists’ work to passersby.
Unique touches in the reception area include plush, red, fold-down chairs obtained from the Theatre Royal in Newcastle after its refurbishment. The reception desk adds a hard, tough edge with rusted metal cladding, while an enclosed gown closet keeps the area tidy.
Styling stations are dispersed between the ground and first floor. Other areas include a manicure and pedicure room, a private styling space for bridal groups and wig clients, a spray tan booth, and a room with a bed for waxing treatments. Exposed brickwork and bespoke wallpapers throughout create a unified feel.

How would you describe the salon’s image?
It’s a look and feel that is pure to our tastes, with every piece hand-sourced to create a visually stimulating, yet relaxing environment that complements the state-of-the-art facilities and individual features: massage chairs, iPad chill zone, a talking parrot and potted palms!
Do you have a corporate look?
We hate corporate. Boilerhouse is our only salon and therefore our sole focus. The whole point of the refurb was to make Boilerhouse vastly different from the same old clinical salons out there.
What was the most expensive part of the refurb?
The shell works were by far the most expensive part of the refit due to the scale of the project.
Is there anything you wouldn’t choose again with hindsight?
Yes, we’d change Sylvester, our talking parrot, who drives everyone crazy!