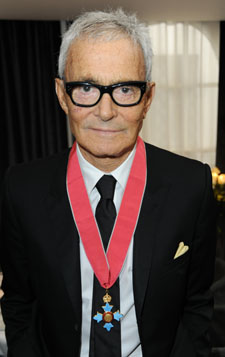 Vidal Sassoon was awarded a CBE in 2009 for services to the British hairdressing industry.

Vidal, who died in 2012, revolutionised hairdressing in the swinging sixties and is seen as pivotal to the UK leading the world when it comes to hairdressing.

Having started his career as a shampoo boy in Cohen’s Beauty & Barber Shop, Vidal returned to his homeland, Israel, to fight in the Arab-Israeli War in 1948 before returning to the UK to work with famous hairstylist Teasy Weasy Raymond, in Mayfair.

In 1958, Sassoon opened his first salon and began to create some of the most iconic hairstyles of all time, his favourite being the five-point-cut that took him nine years to perfect.

In the late 60s Sassoon moved to California, but his legacy continues through the Sassoon salons and haircare products he has given his name to.

In 2010, a film was released telling the story of his life and career.

He said the Queen’s hair, “was very difficult (to see). She was leaning over. It’s a beautiful colour. I didn’t see the style. It truly looked very nice. She didn’t ask me to stay behind and give her a quick trim!”