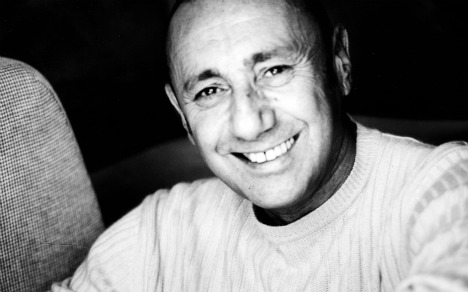 It is with great sadness that we report the death of industry icon Michael Rasser, co-founder of legendary London salon MichaelJohn.
Michael passed away after a lengthy battle with cancer, but leaves behind a legacy of great business practice and creativity, as well as having helped create some of the industry’s biggest names of today.
Michael’s illustrious career began in 1954, when he trained at the famous Leonard salon. It was here that he met his future business partner John Isaacs with whom he went on to open MichaelJohn in 1967.
The philosophy behind MichaelJohn was to provide expert services in a relaxed and comfortable atmosphere – a simple concept that attracted some huge celebrity names including Mick Jagger, supermodel Iman and Liza Minelli. Michael also counted Princess Anne amongst his regular clients.
One of the major attractions of the salon was Michael’s reputation for offering an individual service to each of his clients – he didn’t believe in hairstyles of the moment, but that every client’s hair should be tailored to suit their specific look and lifestyle.
MichaelJohn moved to its current 5,000sq ft premises in the early 1990s in order to accommodate an ever-growing clientele.
In 2001, Michael was awarded the Royal Victoria Medal for services to hairdressing – an accolade that recognised not just his commercial success, but also a commitment to training the next generation of hairdressers. Among his protégés were Andrew Collinge and Robert Lobetta. In 2007, battling with ill health, Michael took the decision to retire, but his influence on the world of hairdressing continued, and will do so for generations to come.
“Michael was one of the great hairdressers of our time. His exceptional skills in cutting and dressing hair ensured he had a clientele that included Royalty and an impressive list of A-list stars. He was also one of the original session stylists, and his services were in demand with top photographers Lord Snowdon, David Bailey, Terence Donovan and Barry Lategan, to name but a few.
“The invaluable experience I gained from watching him create such exquisite work is something I will always be incredibly grateful for. Some of the happiest days of my career were when I worked at MichaelJohn. With Michael at the helm, the salon was always an exciting and dynamic place to work. After more than 40 years, MichaelJohn still remains one of London’s destination supersalons – a remarkable achievement.
“Michael was a kind and generous man. Liz and I saw him a few days before he passed away. He was on good form, chatting about happy memories. He was a great man who I will dearly miss.”
Andrew Collinge
“Michael was an incredibly gracious man, who had a great understanding of people and their persona. The air of professionalism that Michael brought to all of us was unprecedented; he had a manner and a way about him that was unique. Michael’s influence upon me, and many of us who worked with him, was not only about the craft of hairdressing, but how to conduct oneself. There are so many things I learned from him that will always stay with me, and bring a smile to my face. I miss those days we worked together.”
Robert Lobetta
“Michael was a great hairdresser, teacher and businessman, and had a salon in the same street as Vidal Sassoon. He was one of the nicest men you could meet and one of the best hairdressers. He will be sorely missed.”
Harold Leighton
“I’ve had the great pleasure of knowing Michael, and he has been my icon since 1975, when Xavier Wenger introduced him at a student seminar. Michael was, and still is, a true inspiration, and a wonderful mentor who helped and supported not only me but many others within the industry through a fantastic career. He leaves a great legacy, and I will miss him always.”
Denise McAdam
“Michael was one of the last legendary 1960’s hairdressers who shaped hairdressing as we know it. When I joined MichaelJohn as a raw 17-year-old in 1974, MichaelJohn and Leonard were the two salons where all the celebrities and main society members flocked to. Michael was one of the most respected session stylists of his generation, working with the likes of Jean Shrimpton, Jerry Hall and Twiggy. I have never known anyone as good as Michael at putting hair up and he taught me everything I know regarding long hair. Michael is the greatest influence I’ve had during my hairdressing career. I’ve learnt so much from him over the years and wouldn’t be where I am today or achieved what I have in my career without him. I will miss him as my mentor, my old boss, and above all as a friend.”
Clive Lever, senior artistic director, MichaelJohn
“Michael, apart from being a good friend, was a crimper out of the top drawer. I worked with him when I was with Raymond. His belief in standards and as a forward thinker was appreciated by all who truly understood the craft. Although he will be missed, he leaves behind a legacy of great craftsmanship and a loving nature.”
Vidal Sassoon
“Michael played a huge part in my career, as following his return from New York, he was responsible for my move to Leonard and for that I will always be indebted to him. He lived hairdressing 24-hours a day and it was truly amazing to watch him work. He led the most remarkable team along with Leonard creating incredible catwalk hair and was a complete genius with long hair. Totally dedicated to his craft, he was a truly special person. Sadly, we have lost another British hairdressing icon.”
Daniel Galvin