Vidal Sassoon The Movie: The Story of a Hairdressing Legend

Vidal Sasson’s extraordinary life has been made into a documentary. Ruth Hunsley went along to an exclusive screening of Vidal Sassoon The Movie at the Mayfair Hotel.

Every hairdresser has one man to thank for the industry we know and love today: Vidal Sassoon.

His name is synonymous with geometric styling – but his passion and obsession with hair gave us so much more.

The man himself appeared at the exclusive screening of his life, Vidal Sassoon the Movie, at London’s Mayfair Hotel. He was joined by other industry legends: Trevor Sorbie, Christopher Brooker, Joshua Galvin and Annie Humphreys, along with designers Mary Quant and Julien Macdonald. 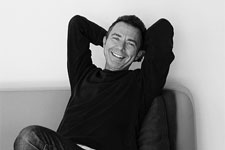 Filmmaker and producer Michael Gordon (pictured right) introduced the film, saying: “Everyone needs a hero and in hairdressing this man [Vidal] is just that.

“He is an extraordinary man. This is a tribute to him and the affect he has had on everyone. He showed what one man can do in this world.”

The film started with soundbytes from those who have worked with Vidal throughout the years, including Joshua Galvin who described him as, “like the messiah”.

The Movie starts at the London orphanage, where he lived from the age of five, and 90 minutes later finishes at his home in Beverly Hills.

Vidal’s hairdressing philosophy was, “If you don’t look good, we don’t look good.” And with that he went on to build a worldwide empire, built on a pair of scissors.

His obsession with hair changed the way women saw themselves and continues to inspire hair today – you only have to look at the Paris Autumn/Winter catwalks to see his influences in the modern world.

Having learned how to cut hair from Adolf Cohen, Vidal had to learn about the other side of the hairdressing business from a man who oozed panache and charisma, Mr Teasy Weasy. “I was a cockney boy from the East End and had to have elocution lessons before I could get a job in Mayfair,” Vidal explained with his soft, British accent.

The emotional film captures Vidal’s highs and lows – from cutting the five-point bob to the death of his beloved daughter.

Vidal Sassoon The Movie, which will be sold accompanied by his autobiography, is inspiring and captivating, and takes you on an extraordinary journey. As he laughs and shares his memories, he says with a twinkle in his eye: “My heart is in hair: always has been and always will be.” And for that, the industry has a lot to be grateful.