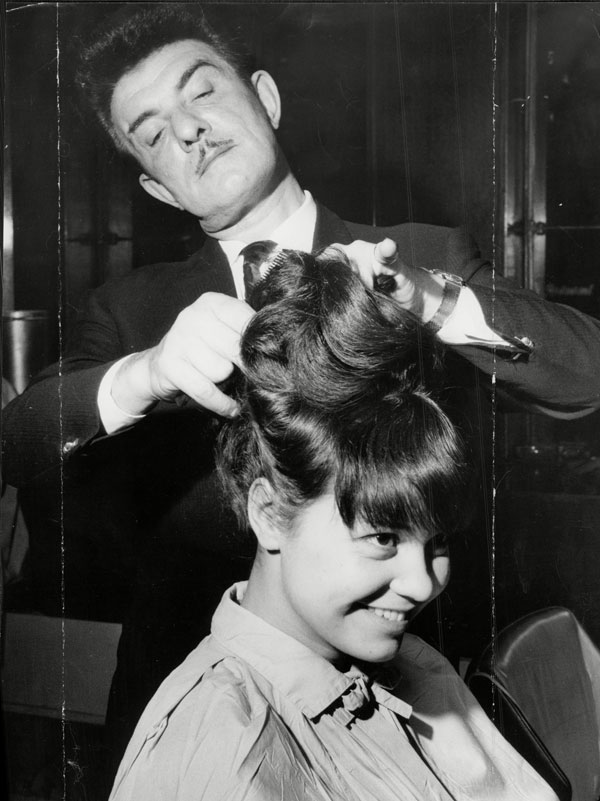 With a larger-than-life personality and even bigger hairstyles, Raymond Bessone – also known as Mr Teasy-Weasy – was the first TV hairdresser and kick-started the concept of celebrity stylists.

Born in Brixton in 1911, Raymond mastered the craft working in his father’s barbershop before opening his own salon in Mayfair. Credited with popularising bouffant hairstyles in the 1950s, Raymond was famous for his immaculate precision-cutting technique, elaborate updos and celebrity clientele.

The decadent Raymond Bessone salon boasted gilt mirrors, chandeliers and Champagne fountains and his own flamboyant style was no less over-the-top. He adopted a faux-French accent and was usually spotted sporting custom-made, brightly-coloured suits, completing the look with a matching pocket-square, pencil moustache and exaggerated long cigarette.

The winning combination of a flamboyant personality and celebrity clients soon brought Raymond to the attention of television producers and he fast became an on-screen favourite. During a 1954 television appearance, Raymond demonstrated his cutting technique by snipping off a “teasy-weasy bit here and a teasy-weasy bit there” – a catchphrase was born and from then on he became Mr Teasy-Weasy.

Raymond eventually secured his own show on primetime Saturday evening television – millions of women were hooked by his elaborate hairstyles and outlandish outfits and almost overnight, he made British hairdressing glamorous and trips to the salon a theatrical experience.

In 1956, Raymond made headlines when actress Diana Dors flew him to America for a shampoo and set, reportedly at a cost of £2,500 – a sum which in those days could buy a small house.

As well as juggling a celebrity clientele, television career and numerous salons around the country, Raymond also trained a wealth of hairdressers in his salon – including Vidal Sassoon who said of his mentor: “He weaved magic through his work and made us feel we were doing so, too. There was only one Raymond.”