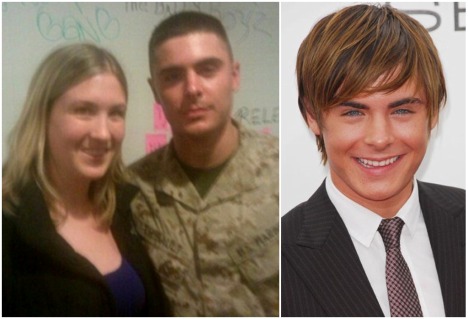 He’s best known as the blue-eyed, floppy-fringed star of the High School Musical films, but Zac Efron has well and truly left his teen heartthrob days behind with this dramatic new haircut.
Although Zac experimented earlier in the year with facial hair and a shorter hairstyle, this exclusive picture from Twitter reveals that the actor has completely moved on from his role as the all-singing, all-dancing Troy Bolton.
Zac is set to play a US marine sergeant in upcoming film, The Lucky One. And while his floppy long locks definitely had to go for the role, it appears he’s not the only one to have got up close and personal with the razor.
Over 30 members of the film crew – including two women – joined Zac in shaving their heads, all in the name of charity. The star and his colleagues donated money – and their hair – to the Locks of Love campaign, which provides hairpieces to under-privileged children in the US, suffering hair loss.